A study was conducted with a photovoltaic distributed generation system in São Luís, Brazil, to determine the influence of meteorological variables on the generation of energy. The methodology is composed of three stages: the first corresponds to the obtaining, organization, and treatment of the data; the second involves the application of mathematical models to determine the yield, operating temperature, nominal power, and estimated power; and the third is to generate the correlations obtained between the monitored climatic variables, whether on an hourly, daily, monthly, or annual scale. For an average temperature of 27.50ºC in March, it was verified that the ultraviolet radiation was 5.06, while the average of the total radiation was 481.01 W.m-2. The maximum peak temperature was 27.88°C at noon, while the ultraviolet radiation was 8.55 and total radiation was 794.97 W.m-2. At this average temperature variation of 0.38°C, there is a variation of 313.96 W.m-2. It is concluded that, because São Luís is very close to the equator, the conditions to produce the system are favorable, mainly because, on average, there were no abrupt changes in temperature and radiation for the period studied. Even in the wintry period, the production behaved within the parameters designed.

The effect of photovoltaic (PV) power generation was discovered in 1839 by Becquerel while studying the effect of light on electrolytic cells. A long period of research was necessary to reach a sufficiently high efficiency in solar cells. In the 1950s, leveraged by space programs for use in satellites, and then in the 1970s energy crisis, technologies for PV energy production have made significant headway, especially with the commercial-scale use of silicon crystalline (c-Si), polycrystalline silicon (pc-Si), and amorphous silicon (a-Si), which made possible the current advancement of the use of this technology (Fedrizzi; Sauer, 2002).

The electrical performance of solar cells depends on the electrical-system constituents and environmental variables (Dubey; Sarvaiya; Seshadri, 2013), and, although several studies have addressed climate influences on PV systems, the use of PV systems is scarce in regions of tropical forest, such as the Amazon Basin, where the climate conditions are unique, and the implementations of these technologies are increasing.

The efficiency of the PV technologies is still widely and ambiguously discussed, because the systems are evaluated with the same Standard Test Conditions (STCs). Although the normal operating cell temperature can express the relation between STC and real outdoor conditions (Hegedous, 2013), the intra-annual and inter annual variability can financially compromise the project because of an unexpected decrease in PV system efficiency.

Several studies have shown that the efficiency of PV systems decreases with increasing ambient temperature (Zhouet al., 2017), affecting mainly the operating temperature, which that plays a key role in the PV conversion process because of the increase in the internal rates of recombination of carriers (electrons or gaps) caused by the increase of the concentrations. The performance rate decreases with latitude because of high temperature, except in regions with higher altitudes with low temperature and high solar irradiation (Swapniel; Narotam; Bharath, 2012).

Tropical forest regions, such as the Amazon forest, have high cloud presence, and, in the Amazon coastal zone, at least six months in the year have a clear sky probability of less than 30% (Sano et al., 2007; Martins et al., 2018). However, the average maximum daily temperature exceeds 30⁰C throughout the year. In this scenario, Silva et al. (2016) pointed to the increase in temperature as evidence of climate change in the Amazon coastal zone.

In a scenario of climate uncertainty, it is necessary to acquire knowledge to support the design of efficient PV system projects in humid, warm climate regions with a tendency for significant increases in ambient temperature, such as the rainforest regions. The focus of this study was on the following questions. 1. What is the variation of energy production during a climatic year in a region of tropical forest? 2. How does variability affect solar energy production in the Amazon coastal region? Therefore, the aim of this work was to evaluate PV energy generation in relation to climatic variation in the Amazon coastal region.

The PV system used in this work was installed in a building on the Island of São Luís at the geographic coordinates of latitude 2⁰29'29.4"S and longitude 44⁰16'52.5"W (Figure 1). 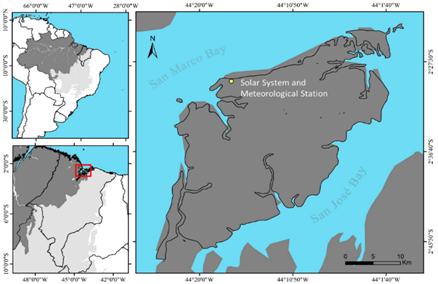 The PV power generation system was composed of polycrystalline silicon (p-Si) cells, consisting of 16 plates totaling an area of ​​25.76 m². The nominal power of the system was4 kWp, the power of the board was250Wp, with a DC voltage of the panel of 30.1V and DC current of the panel of 8.3A. The connection arrangement was of a series type (1 × 16), the power of the inverter being 4 kW, connection on grid, with a nominal voltage of the system of 220V in single-phase connection and a yield of 95.7% (Figure 2a). The acquisition of meteorological data was performed using a weather station Weather WS-2902 WiFi OSPREY Solar Powered Wireless, where the data were stored on hourly and daily time scales (Figure 2a). The data monitored were wind speed (m/s), temperature (°C), rainfall (mm), air pressure (mmHg), air humidity (%), ultraviolet (UV) irradiation, and solar irradiation (W.m-2).

Figure 2 - (a) Photovoltaic system and (b) weather station view 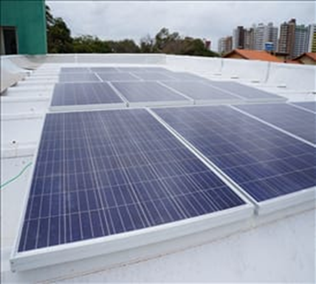 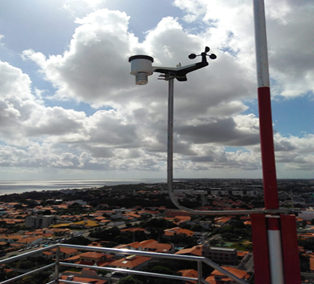 The operating temperature of the PV cells is a key variable for the energy production, strongly influenced by weather conditions. In this work, the operating temperature was estimated by integration of the meteorological variables related to wind speed ​​(Vf), ambient temperature (Ta), global irradiance (GT), and mounting coefficient (ω) (Skoplaki et al., 2008) — see Equation 1.

The Pearson correlation analysis was used to evaluate the correlation among the meteorological variables, and a linear regression analysis was used to evaluate the relationships between the meteorological variables and the energy production of the system in different seasons. These analyses were performed with hourly and daily time-scale data, during the rainy season (February), transition from rainy to dry (July), and dry (September).

The climatic variables and solar energy production were evaluated only in the period between 7 a.m. and 18 p.m., because this was the most relevant interval of energy production. Figure 3 shows the hourly averages of climate variables for each month evaluated. 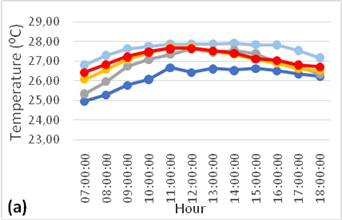 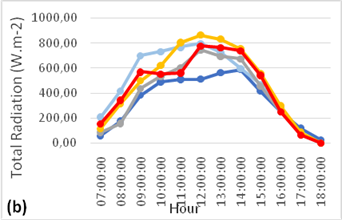 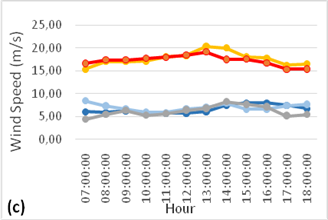 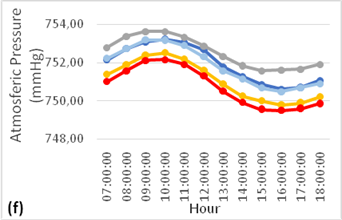 The wind speed had allowed hourly amplitude and high intraseason amplitude, with the highest values occurring in the dry season (17.65 m/s²) and low values occurring in the wet season (7.96 m/s²). The total and UV radiation showed high intraseason amplitudes. The average hourly total radiation at 2:00 p.m. was 593.03 Wm-2 in the wet season (February) and 861.62 Wm-2 in the dry season (October).

Table 1 - Correlation between climatic variables based on hourly data: bold values are statistically significant at 5%

In the daily time scale, the correlation analysis among the weather variables reveals a strong correlation among total radiation, UV radiation, temperature, and pressure (Table 2). Unlike the hourly timescale, in the monthly timescale, the temperature is more influenced by the other meteorological variables. Probably this behavior can be explained by the fact that the temperature is only influenced by atmospheric conditions that last for days.

Table 2 - Correlation between climatic variables based on daily data: bold values are statistically significant at 5%

In the monthly time scale, the correlation analysis among the climatic variables reveals a strong correlation just between temperature and radiation (Table 3). Therefore, in daily and monthly scales, the largest forcing temperature is radiation.

Table 3 - Correlation among weather variables based on months data: bold values are statistically significant at 5%

3.2 Characterization of the system power data and the operating temperature of the PV cells

The highest averages of solar power generation occurred in March, September, and October, and the lowest in February and July. The highest peak occurred in September at 1:00 p.m. (3076.35 Wp) and the lowest peak in February at 12:00 p.m. (2456.06 Wp), considering the best production period that is from 9:00a.m. to 3:00p.m. The periods of lower production were always recorded between 7:00 a.m. and 9:00 a.m. and after 4:00 p.m. (Figure 4a). The hourly average of the operating temperature (Figure 25b) was higher in the month of March, followed by the months of July, February, October, and September. 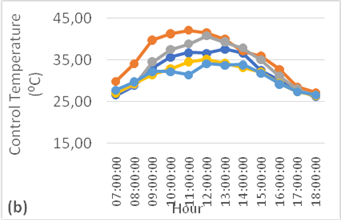 The regression analysis at different time scales revealed the radiation as the mean weather variable to determine the solar power generation (Tables 4 and 5). The daily time scale presented the best adjustment for the estimation of PV energy production.

Table 4 - Regression analysis components corresponding to the linear coefficient (a), angular coefficient (b), coefficient of determination (R²), and p-value, between meteorological data and total photovoltaic energy production in the evaluated system, at hour time scale

Table 5 - Regression analysis corresponding to the linear coefficient (a), angular coefficient (b), coefficient of determination (R²), and p-value, between meteorological data and total photovoltaic energy production in the evaluated system, at daily time scale.

Rain, humidity, and pressure had a direct and strong correlation; however, rainfall and wind behavior were inversely correlated.

The pressure was directly related to solar irradiation and UV irradiation, but inversely related to temperature. The operating temperature had a direct influence on the voltage levels produced on the board or system. For the determination of this variable, Skoplak et al. (2008), in Equation (1), used the ambient temperature, wind speed, and total irradiation, in addition to the system assembly coefficient. According to Griffith et al. (2018), the mentioned variables can be classified in descending order of sensitivity in the results — irradiance, wind speed, and ambient temperature.

The results of this correlation indicate that the effects of temperature rise and irradiation on energy production have an inverse influence on system performance.

An attempt was made to explain how much the climatic variables can influence, in an isolated or grouped way, the determination of the energy production of a plate or of a PV system. Part of the answer is that the main variables that contribute to the production are the irradiation and temperature; however, they only do not respond for all the variation of the system.

The established correlations between the climatic variables and the energy production demonstrate that the oscillation in production is related to the variation of temperature and irradiation.

The effect of wind speed on the boards is highlighted by their ability to cool the modules and possibly reduce the damaging effect that excess heat can have on the system. At temperatures closer to nominal, 25ºC, the energy production is lower because of the lower irradiance. In the period from 9:00 a.m. to 3:00 p.m., considering the average full-sun period, the temperature and irradiation are at their maximum peaks, and the system performance is lower, and this inverse effect is reflected in the behavior of energy production.

Energy production can change dramatically if climatic conditions change rapidly, such as the effects of humidity (cloudiness) and rainfall, which act to reduce the production of the system.

It can be concluded from the results of the question that, although São Luís is in a transition region between the Cerrado and the Amazon, which is very close to the equator, the conditions for the production of the system are favorable, mainly because, on average, there were no abrupt changes in temperature and radiation for the period studied. Even in the wintry period, the production behaves within the parameters for which it was designed.

In relation to the integrated influence of the meteorological variables in the production of PV energy, the answer is “yes”; however, it should be emphasized that this conclusion comes from the correlation already discussed. To better answer the question, a multivariate analysis is planned, based on two univariate and multivariate analyses.

LAVRATTI, Paula Cerski; PRESTES, VanescaBuzelato. Diagnosis of the legislation: identification of the norms with incidence in mitigation and adaptation to the climatic changes. Institute the right for a green planet, 2010.